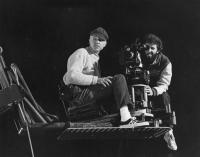 (ICS Founder / Chief Executive Officer) Haskell Wexler has had a varied career — one that most of us would wish to aspire to. Early in his career he briefly made industrial films in Chicago, then became an assistant cameraman. Wexler worked on documentary features and shorts; low-budget documentaries such as 1959’s The Savage Eye, television’s The Adventures of Ozzie and Harriet, and numerous television commercials. Many years later Wexler founded a television commercial production company, Wexler-Hall, with long time friend and colleague, Conrad Hall. In 1963, Wexler served as the cinematographer on his first big-budget film, Elia Kazan’s America, America. Notwithstanding their personal and political differences, the film was stunning, beautifully photographed, and Kazan was nominated for an Academy Award for Best Director. Wexler has worked steadily in Hollywood and the world thereafter.

In 1965, Wexler was chosen to shoot Mike Nichols’ screen version of Who’s Afraid of Virginia Woolf? Wexler won an Academy Award for the film’s brutal, black-and-white cinematography in 1967. He won a second Oscar in 1976 for Bound for Glory, a biography of Woody Guthrie (whom Wexler had met during his time in the Merchant Marine). Bound for Glory was one of the earliest feature films to use the Steadicam in a famous sequence that also incorporated a crane shot. He was also credited as additional cinematographer on Days of Heaven in 1978 which won a Best Cinematography Oscar for Nestor Almendros. He has also worked on documentaries with human rights activist Saul Landau. The 1980 documentary Paul Jacobs and the Nuclear Gang earned an Emmy award.

Wexler has directed only a handful of movies, but among them was the influential Medium Cool, a film written by Wexler and shot in the cinéma vérité style. It incorporated riot footage from the 1968 Democratic National Convention. Another directing project was From Wharf Rats to Lords of the Docks, an intimate exploration of the life and times of Harry Bridges an extraordinary labor leader and social visionary – “a hero or the devil incarnate, it all depends on your point of view”.

In 1988, he won an Independent Spirit Award for his cinematography on John Sayles’ Matewan (for which he was also nominated for an Academy Award), and in 1993, he won a Lifetime Achievement Award from the American Society of Cinematographers. In 2004, he was the subject of a documentary, Tell Them Who You Are, directed by his son, Mark Wexler. Haskell was awarded the International Documentary Association’s 2006 Career Achievement Award, and in January of 2007 he won The SOC’s Board of Governors Award for Lifetime Achievement.
•Haskell Wexler passed away on December 27, 2015 at the active age of 93.•

(ICS Creative Director) David S. Wexler :: aka Dr. StrangeLoop :: is an LA based astral projectionist, VJ, and musician, represented by the BRAINFEEDER label.  As the son of Academy Award nominated Sound Mixer Jeff Wexler, and grandson of Academy Award winning cinematographer Haskell Wexler, he grew up deeply interested in the power of sound and image, and the interplay between them, and the other senses. When he was 21, he founded a media-production / think-tank to research mystical states of consciousness, and implement that research into emerging media. His films have been screened around the world at festivals, on television, and in colleges. He is a VJ and graphic designer,  collaborating with world-renowned hip-hop innovators like Flying Lotus and SamiYam, an accomplished experimental musician, and an event organizer working in Los Angeles. 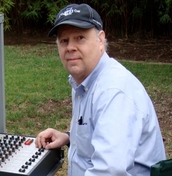 (ICS Executive Director) Jeffrey S. Wexler, CAS has been working as a production sound mixer in the motion picture industry since 1970.  He has mixed over 80 feature films, hundreds of commercials, numerous documentaries, and has been nominated twice for an Academy Award (for The Last Samurai and Independence Day), once for an Emmy (for 61*), and won a British Academy Award for Cameron Crowe’s Almost Famous.

February 2011, Jeffrey was honored with the Cinema Audio Society's highest honor, the CAS Career Achievement Award, given at the 2011 annual CAS Awards Banquet.

(ICS Executive Program Director) Since 2000, Jordan Byrne has been working as a freelance film & video producer, director & editor.  More recently, he’s been working as a video artist, event producer, and as a writer and voice actor for animation and video games.  In 2008, he became a founding member of The RAIZEcollective, along with ICS Creative Director David Wexler, and ICS Program Manager Ten Terrell.  Together, they produced a successful series of music and art events that showcased cutting-edge media, art, and sustainable technologies.

Jordan brings his experience in all realms of media production to developing new programs and initiatives for ICS, cultivating new partnerships and alliances, and execution of ICS events.